Poker For Free » Satellites – When your Bankroll Just Isn’t Enough…

So you do everything right, you play a solid game of poker, you do proper bankroll management and because of that you have been able to consistently play well at a certain level. Way to go! If you are capable of this, I have a lot of respect for you, because most online poker players tend to deposit and loose it all, or either cash out their winnings directly. It seems though, that you understand the point of growing and becoming a better poker player very well. Start low; move up a step at the time and most important, being able to move back to a lower limit instead of jeopardizing your bankroll and having to reload.

Although the first paragraph of this article seems to focus on bankroll management, it actually doesn’t. Instead, this particular poker article is about how you can play among the big guys, for instance in the Sunday Warm-up or the Sunday Million at PokerStars, without going broke naturally.

I’m sure that you know that the best way to play in poker tournaments in the higher buy-ins range is through online satellites. Satellites are +EV, you play to qualify and usually that can be accomplished without having to finish first, or among the firsts.

Many times you’ll see that regular tournaments have a payout structure where a lot of players get ITM, but only the top 5 players get a significant prize. When playing satellites, about 1 entry-ticket per 10 players is guaranteed. This means that your chance to accomplish your goal in a satellite is a lot higher, as you don’t need to finish in the top 5 out of 1000 players (0.5%) to get paid well. 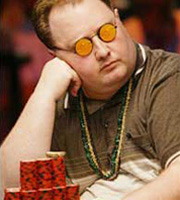 The reason I chose to blog about this subject is that I will try to qualify online for the main Event of the World Series of Poker 2009.

Closer to home is the success of my friend Avy Rijnbergen. He qualified last year on PKR and played himself all the way to the Rio in Las Vegas for just a little over a buck! He didn’t win, nor get In The Money, but he had an unforgettable experience!

Now, back to the subject of this writing again, as I will update you about my shot to qualify for the next WSOP in a series of articles that I plan to write, starting somewhere next month.

Let’s focus on the Sunday Million for now, as this is a very interesting weekly tournament at PokerStars with a $1,000,000 guaranteed prize pool, where the winner may easily get as much as -, or even more than $150,000.

Usually you will need quite a big bankroll to back-up playing such a tourney, as the buy-in for this online poker tournament is as much as $215. Let’s do some bankroll math: $215 x 30 = $6,450. Does this match your bankroll? Probably not, since you’re a visitor of Poker For Free. (Exceptions excluded of course.)

Don’t be disappointed yet, because PokerStars offers you several satellites to qualify cheaply for the Sunday Million:

Basically, you will only need a bankroll of $90 to take a shot for a share of $1 Million, but of course a little more wouldn’t harm. An example would be the $11 Rebuy. On average, this tournament gives 1 entry for the Sunday Million to 1 out of 6 players… Do you now understand what we mean by saying that satellites are +EV?

Again, let’s do some more poker math to show you some perspectives:

Sub Satellites are low buy-in satellites where you can qualify for another satellite.

Many times you will find a range of multi tier qualifier tournaments where you can start playing for a very low buy-in of cash or even FPP’s and eventually play yourself all the way up to a grand final. This is usually the case when they give away tickets to the WSOP, EPT or for instance the WCOOP (World Championship of Online Poker). This way, any player with skills, but without budget can take a shot of fulfilling their dream.

We have previously mentioned PokerStars’ Sunday Million Satellites, but there are more interesting satellite tourneys at the biggest online poker room. Here are the ones for online events that to me seem most appealing: