Plans for The Big One For ONE DROP poker event at this year’s World Series of Poker (WSOP) are advancing well as more than 20 players have already signed up for the $1 million buy-in tournament that could well surpass even the largest ever WSOP first prize.

Last year saw records tumble at the WSOP and WSOP Europe – and 2012 is certainly on course to once again rewrite the history books after 75,672 entrants from 105 nations converged on the Rio All-Suite Hotel & Casino in Las Vegas as more than $192 million was awarded in prize money.

If between 45 and 48 players register for entry to the No-Limit Hold’em tournament, a prize pool of $40,000,005 will be created with an astounding $17,200,002 – and the specially-designed first ever platinum bracelet – going to the eventual winner of event #55 that kicks off at midday on Sunday, July 1, for three days’ play at the Rio in Sin City as part of the 43rd staging of the WSOP.

Remember, Germany’s Pius Heinz picked up $8,715,638 for winning last year’s WSOP main event, while the largest ever top prize in the tournament was the $12 million secured by American television producer Jamie Gold back in 2006 as poker became the biggest thing on the planet.

That enormous sum is still more than five million less than what could well be on offer at The Big One For ONE DROP come July, while the charity event is likely to offer an incredible $15.5 million more than the $2.5 million collected by Atlanta’s Chris Moneymaker in 2003 when heralding a new and vibrant era in poker with his triumph.

Amazingly, Heinz’s winner’s cheque will still be less then the second prize – if at least 45 players take part in the charity tournament – of $9,480,001 that will be handed out on July 3.

The field has been restricted to just 48 players, but already 22 have signed up – although only some can be named – to make this an official WSOP bracelet event, and that number includes ONE DROP chairman and Cirque du Soleil founder Guy Laliberté, four-time WSOP bracelet winner and MGM-Mirage Resorts chief executive officer Bobby Baldwin, Treasure Island Resort of Las Vegas owner Phil Ruffin, and Texas-based billionaire businessman and high-stakes poker fanatic Andy Beal.

Additionally, Sean O’Donnell – a friend of Laliberté’s – has been confirmed as the Montreal Group seat from a satellite run by Quebec’s Casinos, and he will soon be joined by another prominent businessmen, while a European satellite seat is still to be won, as are the entries from Loto-Québec and two from Caesars – with one coming via a Mega Satellite and the other through an as-yet unnamed promotion.

If the maximum 48-player field is reached, the top nine players, or 20% of the field, will be paid, with $1,040,000 going to eighth place, which – you won’t be surprised to read – is a healthy $29,985 more than Ukrainian Anton Makiievskyi pocketed for securing eighth place from the WSOP main event.

All Big One For ONE DROP Prizes Above Million Mark

Now, just hold on a few moments while I give you final piece of cash stats. Englishman Sam Holden took ninth spot on November 8 for $782,115 and no prize from The Big One For ONE DROP falls below the million mark. That’s pretty incredible, don’t you think. 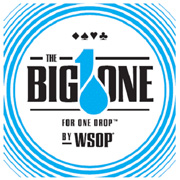 Oh, and just one more number for you. The biggest field for a Big One For ONE DROP event is 28, so we could well see that cast into history this year. Just seven more names need to be added for just the latest addition to a long line of record-breakers – and organisers are expected to announce some new entrants any day now.

But it’s not all about cash prizes, with $111,111 from each entry going to Montreal-based non-governmental organisation ONE DROP as no fees will be taken from the prize pool or charitable donation.

ONE DROP’s aim is to battle poverty through helping provide access to clean water across the globe, while also raising every individual’s awareness – via their social arts and popular education approach – of water-related issues.

Already a public charity in the USA, ONE DROP also organises numerous activities there to promote positive and sustainable changes throughout the world to ultimately ensure that safe water is available to everyone.

With that in mind, the revised Big One For ONE DROP tournament was created by Laliberté after he approached fellow Montreal native and Caesars Interactive Entertainment chief executive officer Mitch Garber last year with a plan to marry the obvious generosity within poker to the WSOP’s expertise and experience to form a never-seen-before tournament that will also raise funds and awareness in the fight to supply clean water globally.

Laliberté – a renowned philanthropist – seized the perfect opportunity to boost that awareness last year during the November Nine when he announced the addition of several new competitors, including Triple Crown winner Grospellier and 2010 WSOP main event winner Duhamel.

Certainly, French-Canadian Duhamel – who only recently had his bracelet returned following a vicious burglary at his home last year – understands the importance of getting ONE DROP’s message out there.

The 24-year-old said he was “absolutely thrilled to participate in the biggest poker event ever organised”, but, although admitting that “one million dollars is a lot of money”, he stressed that his “participation comes naturally, being a spokesperson for ONE DROP and because of my attachment to such a great cause”.

Duhamel also emphasised that “life starts with water and, because of its uneven distribution, a person dies every 20 seconds”, so has already committed to giving “5% of my winnings from this tournament” to the charity.

He also believes that, as ONE DROP will be given $111,111 for every participant, this “definitely proves the poker community attachment” to Laliberté’s cause.

Laliberté also used the main event final table to launch a campaign created for the poker community at large, named All In for ONE DROP.

All In for ONE DROP Targets Social Media

This is where other players can get involved, even if they can’t manage the massive buy-in for the tournament in July. Really, only a handful of players and individuals can, so Laliberté has focused on social media in an attempt to encourage others to take an active part in the charity’s goals.

If inclined, players can volunteer as a poker ambassador for ONE DROP, with some already committing to donate a percentage of their yearly tournament winnings, as well as to wear the special All In for ONE DROP merchandise as they spread the word.

Without doubt, Laliberté is thrilled that other pros have given their support in such a significant manner, with the 52-year-old saying that “every gesture is important”, while also recognising that “the poker community is very generous” and that it is “not only about the one million dollar” tournament as there are many “other ways that poker players can make a difference”.

If you want to get involved – or to find out some additional information about ONE DROP – then get yourself over to the official websites of www.onedrop.org and www.wsop.com.