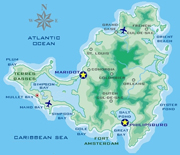 I have just returned home from a two week vacation to the Caribbean island Saint Martin with my family. It was a whole lot of fun, especially seeing my almost 2 year old son enjoying the ocean and the pool at our hotel. Besides that, my girlfriend and I went out eating and drinking almost every night, together with a couple of friends from the States (who came over to join us for a week), while my mother was babysitting our son. It’s been years since we went out this frequently, and this holiday was very enjoyable, even though my mother came along. ;)

On a couple of occasions I went playing poker in two of the 12 casinos the island counts. St. Martin is partitioned between two different nations (Dutch and French), and the casinos are only allowed on the Dutch side. Some of the Saint Martin casinos are small, have lot’s of slots and no poker rooms. Very few players (except for some huge Americans and locals) could be found playing, mainly because it’s currently low season, but some others were larger (not massive like Las Vegas, but respectable) and offered also a couple of poker tables.

I was recommended by my brother who’s a resident of St. Martin to go to the Atlantis Casino, very close to the French border (not that there is an actually crossing line). They host 3 multi table tournaments per week. A $75 Rebuy and Addon on Saturdays and Sundays, and on Wednesday a $150 freezeout. Because I had only one night off, I had to make a choice between one of these three poker tourneys. I decided to pick the $75 R&A on Saturday since I was very eager to play in real life.

When I arrived at the Atlantis Casino I felt really excited. This was my first time to play in a live tourney, besides the games I play with friends. I made sure to come in time, so I would not miss registration. After I registered I sat down at the bar for an espresso seeing more and more poker players arrive. At 9 PM everybody was called to their table. I was sitting at table 4, seat 10, just right to the dealer who was quite cute, but not very friendly.

The Atlantis Casino has 8 tables, and about 64 players were registered (8 per table). Many of the players were French. It kind felt like some of the men sitting at my table were celebrities, looking at their clothes, watches, polished nails, and age differences between them and their accompanying women. The Atlantis Casino is also very close to the Low Lands area on Saint Martin, which is where the very rich have their mansions, so it could definitely be the case. In any case, they held a whole lot more of cash in their wallets than I did. ;)

Everybody received 2000 starting chips, and immediate rebuys were allowed. Because of this some who could afford it started with double the amount I had. As I didn’t want to spend too much money, I just decided to wait for the good hands, not risking a quick rebuy. The main reason I decided to play anyway was to have a good time!

For a while I kept folding… but when nobody bet while I was sitting on the big blind, I was able to see my first flop. This is one of the few hands I didn’t remember very well when analyzing afterwards, but one of the two cards in my hand was a 9. With another 9 on the flop I decided to call a small bet, even though I had middle pair with also at least one over card (K) on the table. The fourth street didn’t help me. When everybody checked up to me I decided to make a small informational bet. I got called by just “the French Goth-father”, an older man dressed up in all white clothes. The river came, and again it didn’t help me. I do remember there were a few over cards, so I was ready to lay my hand down. Don Corleone instead just checked, so I could see the showdown for free. I checked and took away the pot with only a pair of 9’s.

Just a couple of hands later I got dealt pocket K’s. I really felt uncomfortable (nervous) and wanted to hide all my tells, but I did raise about three times the big blind. The only caller this time was “the Writer”. I gave this name to the man sitting on seat 7. This was the type of guy that you couldn’t miss when walking into the Atlantis Casino. He had long curly brown hair, and I put him on fifty-some years. The girls around him seemed at least 30 years younger. He had such typical expressions that it was very amusing to observe him, and by the looks of it he also didn’t mind to drink a few now and then. Anyway, as you can understand… this was one of those men that beat me straight away if we would have count the money in our wallets. Though, “the Writer” was definitely not a good poker player, sometimes you just don’t believe the hands people show.

This hand started perfectly when I hit trips with the flop, what a shame that it was just me versus “the Writer”. I raised about half the pot size, and hoped he held the other K in his hands, having top pair or perhaps even 2 pair. He called, and I decided to bet a bit more after the turn card. Unfortunately he folded without showing his hands.

Because of my conservative way of playing, people respected my stealing attempt while sitting in late position. With this move I managed to raise my stack up to 4000, just before the break.

Pizza’s came in for all players when the break began. Most players left their seats for a slice or two, including me. Players were given the opportunity to addon for $75 right after the break. At first I didn’t want to, but when I noticed that everybody got 5000 extra chips to their stacks, I decided to put in the money so at least I could still compete. I gave the tournament director 80 bucks, got my chips, but never received the change… Oh well, I couldn’t really care since I was having a great time!

For a while I was back to folding pre flop, since I received only trashy hands not matching my tight way of playing. As time ticked by, I was finally dealt a reasonable starting hand. I was in late position and decided to call a bet of three times the big blind with AT suited of Diamonds. I was the only caller, so I needed to hit on the flop to make this hand work out. There were two Queens on the flop, and I don’t remember the third card. What I do remember is that the third card, and one of the Queens were Diamonds giving me a nut flush draw. Chasing the flush unfortunately cost me more than half my of stack, dropping to less than 4000. My opponent was a smart player, a bit scary since it was a guy wearing eye brow make-up, but he made sure to get as much as he could giving me the proper calling odds after the river. He showed AQ, and took the pot.

Not much later they moved me to another table together with a guy sitting on the small blind. This was actually a frustrating move, since I had plenty of tells on some of the men at my table. When I was moved, the manager switched me from big blind to small blind, and the other guy got “my seat”. Of course I had to lay my first hand down, and he showed the nuts making him win a nice pot. Don’t let me bother you telling how that feels!

The second play was actually quite good for me. I was sitting on small blind, and the button moved all in to steal my chips. I needed to make a move sooner or later, so I decided to call with pocket 3’s. My read was good, he showed K8 off-suit and my three’s held up. The man acknowledged my play, and complimented me for the call. I doubled up to 6000 and was ready to sit and fold for another while.

That “other while” didn’t last very long because only three hands later I was dealt pocket Queens. This was my best hand, besides the Kings in the early stage of this tournament. To play this hand I had to face a few arguments. My stack (low compared to most opponents at the the table) made it do or die time, I was in early/middle position, and didn’t have a lot of information about the other poker players. The man just in front of me raised twice the big blind. I didn’t think he had a better hand than I did after thinking for a few seconds. Isolating him seemed to be the best play, thus moving all in was the right play IMO. The two players right after me folded, but the third one also moved all his chips in. Oops, I didn’t see this one coming! The man who made the initial bet called and we all opened up. He showed AK off-suit, the man after me showed a pair of sevens (Hearts and Diamonds), and I was happy to hold the strongest hand. Unfortunately luck wasn’t on my side. The flop had a King, the turn an Ace, and the river was a Hearts completing the lucky flush of Hearts for the guy holding sevens, and ending my tournament.

After being eliminated I actually felt a bit miserable. I over thought my play, and thought about alternative plays I could have made. Until this very moment I’m still confident that moving all in was the best decision.

It was past 2 AM, the total pot was over $16,000 and I stayed observing the tables for a short while. Not much later I decided to leave the Atlantis Casino on Saint Martin, leaving me with a wonderful memory of my first life poker tournament. This experience cost quite some money, but was well worth all of it. I loved sitting at the table with “the French Goth-father” and “the Writer”, I loved staying alive for 5 hours just playing a total of 6 hands, I just wish that I held one Hearts in my hand on that last play. ;)