Giorgio’s Trip To Sint Maarten – Ace On The river

This morning when I was doing my daily workout in the hotel’s gym, I was rethinking yesterday’s poker night. First of all, I didn’t make it to the R&A tournament at the Atlantis World Casino, since we went out eating sushi at Wasabi’s. While doing my thing on the home trainer I was also debating in my mind about the title for this article. Many ideas came up in my mind, but I finally decided to choose “Ace on the river”, so it will at least leave the readers guessing a little bit.

Anyway, after dinner we split up, some of the group went to Lady-C, my dad was exhausted and went to sleep and I had the night all for myself, so I went to Casino Royale across the street to see if I could catch some cash game action. Surprisingly the table was filled with 5 players and I was happy to join them. The stakes were $5/$2 with bets of multiplies of $5 only. 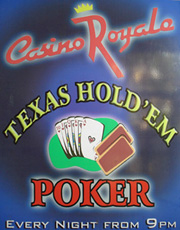 I have been playing for about 3 hours and never managed to get a higher profit than about 50%. More players also came and at a certain moment we had 9 players at the table. I still went up and down, and with just 4 players left it was time for the last orbit around 1:00 AM when I got dealt pocket Jacks. I placed a $15 bet UTG and was called twice. The King high flop brought another Jack as well, there you go, I had trips. I checked and another check followed before the BB placed a $15 bet. I raised him with another $15 making the other on SB fold. It was me against a friendly guy from New York, a really experienced poker player according to what I picked up. At this time he re-raised me with $100 and I wanted to move all-in, if it wasn’t that I made a communication error with the dealer. So I just called leaving me with just $25 left. The turn was a blank.

At this moment he checked and I shoved the remainder of my stack to the middle. Of course he called for value and we opened up. I showed him my Jacks and he showed an open ended, holding QT in his hands. Only an Ace or a 9 could help him, 6 outs… and the… well… needless to say anything more, as you know the title of this article.

He had approximately 17% chance to win this hand and these things happen, sometimes also in your favor. I was invited to join them going to the Atlantis, but they were going to play Omaha. As I didn’t want to risk a tilt and loose more than I already did, I decided to go to the resort and get some sleep.

So that was the story of last night’s live poker. Having a total loss of $200, I’d say: “Shit happens!” I can’t care less about the money as I did have a great night, although I hope to be a little more successful tonight!

By the way, I am now sitting under an umbrella on the terrace of Fashion Cafe, which has free WiFi access. The temperature on St. Maarten/St Martin is approx 32 degrees centigrade and yes, yesterday I managed to get sunburned in less than 2 hours :( Oh, by the way… today’s my dad’s birthday!