Freeroll tournaments can prove to be a mine field of different poker players and so can be harder to win than a tournament that features a buy in due to the fact that players have nothing invested in their involvement in the tournament, allowing the players to open the playing stance much wider than if they had money invested in their tournament participation. 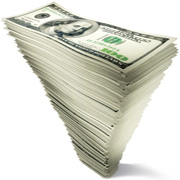 The fact is that if you are reading this article, you are reaching the final table section of the tournaments but are crashing out of the tournament before you are able to make a stand for the first place finish and so you are now looking for ways to improve your play.

The first thing that you need to look at when you reach the final table within a freeroll tournament situation is just exactly where you stand in terms of the stack that you have in front of you, this will help you to be able to determine what style of poker you should be playing to be able to maximise the chances of winning the tournament rather than spending hours playing them just to crash out before the real money comes into contention.

So to be able to establish exactly how you should be looking to play the final leg of the tournament, you need to be able to place your standing into one of any of these 4 categories, be honest here as believing that you are not within the category that you are representing could lead to you trying to play a strategy that doesn’t suit your requirements in that particular tournament.

Basically this means that if you have just scraped into the final table proceedings with a very low chip count, you are most likely to be the player that is next to be sent to the viewing area rather than the winners compound.

Being in this situation, many players consider their chances to win the tournament as so slim that they might as well play any hand that they are dealt, but play to the strategy surrounding this situation and you are in with a chance to be able to claw your way back into the tournament for a higher place finish.

You are considered to be the short stack of the tournament even if you are a couple of chips off the pace, realise this and adapt your strategy to best suit this situation and once again, you will be able to climb back into contention.

Obviously your strategy is going to be different to that of the other categories so you need to make sure that you are able to adapt to the strategy to be able to take the tournament down and fight for your place at the first place podium.

Okay, now that we have given you the categories for which you should be able to relate to, let’s get the strategy into play so that you can finally make these tournaments pay out the maximum amount of prize money.

Being within this category means that you are most likely to become the player who is going to be targeted by the bigger stacks within the tournament and so you need to think about the hands that you are willing to play, limping into a pot with a medium strength hand just simply isn’t going to cut it here as your likely to get raised and placed all in before the flop.

You have to be willing to adopt a playing style that is known within the online poker community as ‘Push or Fold’, meaning that any hand that you are willing to play has to be played with an all in shout.

Failure to show this sign of strength within your hand will make you a sitting duck for a higher chip stack to re-raise or move you all in, you want to be the first player to show strength.

Showing that you have enough willing to invest the whole of your chips and your poker tournament life on this one hand will mean that many players will have to think long and hard about their decision to call your play or not, increasing the chances of you being able to take the blinds or to simply protect them at your time of need.

Obviously with the forced betting amounts raising, you need to be a little more accommodating with the hands in which you are willing to entertain making this play with otherwise you risk been forced into a play with a poor hand as the blinds pass over you and your chip stack decreases.

That doesn’t mean that you should be looking to play each and every hand like this, doing that will show players what you are doing and they will lose any respect for your play that you might have earned while at the tables.

Playing a tournament final table as a short stack is just as hard as having to play it from a ‘Tournament Hanger’ prospective and so you need to be aware that players are likely to be looking to you as a prime target for their strong plays and bluffs.

With this in mind you need to think about what cards you are willing to use in order to enter into a pot as the likelihood is that your play will be considered to be a play for chips rather than a sign of strength.

You have two option in terms of the hands that you are going to play in order to keep yourself within the tournament, you can either play hands that are going to offer you a coin flip pre flop but you have to be willing to back up your hand with your entire stack is needed to, or you can sit and wait for a power hand.

Sitting for a power hand can be hard to do sometimes, taking you out of the action and rendering you useless as people look to steal your blinds but you have to think that hitting one strong hand could well see your chip stack double within a matter of minutes, offering you double the chance of holding on and turning your tournament around.

So to recap, you either wait for the premium poker starter hands to fall into your hole cards from the dealer or you play cards that you are willing to back up with the entire chip stack you are holding, otherwise fold your cards and get out of the action.

Being in this situation means that you are able to select how you want to play the game dependent on the opponents seated around you, you can either look to play more hands and force others into action or you have enough chips to sit and wait for the premium hands without the risk of forced bets eating away at your chip stack significantly.

Personally I prefer to play the waiting game and allow myself to pick up a strong hand before I am willing to wager additional chips into the central pot because this way I have some fire power to place behind my play rather than having to fold to players who are looking to re-raise you in order to steal the chips you have invested in the hand already.

Playing more hands means that you have to be willing to bring more bluffing into play as you need to show that you have the hand to keep playing within the hand, failure to do that will mean that you have the increased possibility of an opponent calling your action and reducing the chance of you winning the hand by betting alone.

Definitely the best position to be in within any poker tournament, thus not just a free poker tournament. This means that you don’t only have time on your hands to wait for the best premium hands but you also offer a large fear factor to a number of your opponents, opponents who are less willing to enter into a hand with you in order to retain their tournament standing and lifeline.

Due to the fact that players are less likely to want to enter into hands with you while they are holding medium strength hands, you need to be willing to exploit that fact and once you have a hand that you are happy to play, you need to come out fighting, placing large amount bets into the pot so that your opponent has to either commit or fold.

If you play this strategy right and are able to avoid getting into a hand too deep with a player who is genuinely holding a strong hand, you will find that the players remaining at the table becomes less a lot quicker than if you were not to play strength each time that you enter into a pot. Keep the pressure on players and they will make mistakes or they will simply allow you to take the pot without contention.

Once you have managed to see of a couple of the players and things are rounding off to the last 5 players left within the tournament, it is then time to allow other players to play and you take a break, waiting for the premium hands before you enter into a pot.

Allowing others to absorb the risk of having to play cards that are less preferred within the poker starter hands listings means that you are keeping yourself out of the way of any bad beats or big hands that might occur while you are waiting on the hands to make your assault on the tables.

This means that players will soon begin to knock each other out of the tournament and the fact that you are not entering into the hands means that they are more likely to place higher level bets into the pot in order to try to win the pot themselves, you get one pot where three players feel that they have the best hand and you could well see two players being eliminated from the tournament without you having to stake more than any forced bets.

Finally once the table reaches the final two players, so you and one other opponent it is time to adapt your play again, breaking into heads up strategy rather than waiting on the hands that every poker player dreams of, doing this means that you are subject to lose a number of chips to hands that are more than likely no more than medium strength.

The only thing you need to do here is to broaden your starting hand selection to include some more of the picture cards, doing this means that you will more times than not have an over card of some value so even heading into a hand that could well be pocket pairs against you, offers you a number of outs.

All you have to remember at this point is to select your hands carefully and consider how your opponent has played while on the table with you, if they are aggressive they are likely to continue to be aggressive when it comes to their action but if they have a track record for being passive then they are likely to carry this though into the heads up section too.